Based on the pleasant history of the brand win at all costsWAAC has a witty brand concept and various contents such as wackya cheerful evil character who leads the game to victory by blurring the opponent’s concentration. 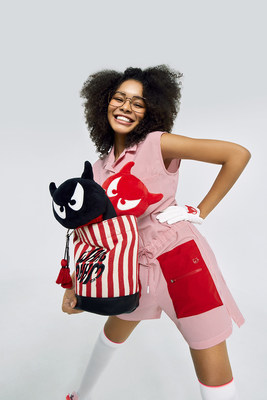 Since the brand’s launch in 2016, WAAC has been leading differentiated character marketing in online and offline environments using WAACKY’s story. The company plans to use seasonal campaign development, character collaboration, KakaoTalk emoji creation, as well as spatial collaboration marketing to create a “WAACKY room” in conjunction with golf’s premium studio. Plaza Golf.

The Korea Creative Content Agency reports that the domestic character market is growing at an average annual rate of 7.8%, and the industry expects it to exceed 20 trillion KRW This year. The transition of society to a intact, the online community caused by COVID-19 has influenced the renaissance of the character industry and the revitalization of social media and the entire digital environment. In particular, media platforms on global networks such as YouTube and ZEPETO have become commonplace, accelerating the character industry’s entry into foreign markets.

Why is the character industry growing day by day? Character-based businesses are a popular domain for everyone, regardless of age, gender, or generation. The character’s unique intimacy and likability is conveyed through storytelling that strengthens emotional connections with consumers, which is the most important factor in its popularity.

A recent example of WAAC’s character collaboration is meeting the beloved character Hello Kitty. This collaboration is also a glimpse of the global status of the Korean brand WAAC. He was first offered by Sanrio Korea, who became interested in the character, WAACKY.

The WAAC x Hello Kitty The capsule collection consists of sweatshirts and pants, as well as a hat and socks, and plans to attract new female customers from the MZ generation and increase awareness of the character. Of May 13 to June 7a pop-up store will open in Sinsa-dong, Gangnam-gu, Seoul. In the pop-up store, a large Hello Kitty object was installed, and an outdoor Beer Pong game and photo area using a lab cart was installed. The company also plans to increase brand awareness and provide a branded experience for customers, such as operating a cafe with a limited menu for WAAC x Hello Kitty collaboration.

Plus, this year’s WAAC collaboration with global character brand BT21 offers new fun through a growing golf story of forming a team. Main items include a jumpsuit reminiscent of a caddy uniform, short-sleeved shirts with animated characters, and ball pockets. Additionally, WAAC collaborated with Sonny Angel to publish figures. It was presented as a gift only to customers who purchase more than 600,000 wonbut it was so well received that it stimulated the desire to Sonny Angel maniacs to collect it, and there have been many requests for sale.

Its globalization is based on the success of the internal market this year. In the domestic golf market, which has recently become very competitive, WAAC achieved sales of KRW 40.7 billion in 2021, registering a growth rate of 80% compared to the same period last year. Since 2019, WAAC has already started its overseas activities in earnest by signing a licensing agreement with TAKIHYO, a Japanese textile and apparel company. Currently, the company operates eight stores including one in Shinjuku, Tokyo, and plans to expand to 15 stores by the end of this year. The company has also expanded into the Chinese market by entering that of Beijing high end golf selection store S+G in the SKP department store in October 2021and operates five stores on the course, including Mission Hills Clubhouse at Shenzhen. The business also plans to expand to a total of 10 stores in China by the end of the year. Not only that, WAAC is also entering the US market, the homeland of golf. They will partner with WGS (Worldwide Golf Shop), the second largest golf retailer in the United States, and customers will be able to view WAAC’s products in eight stores and online malls by the end of this year.

WAAC CEO Kim Young-kyoung said, “As metaverse technology becomes more popular in the future, the role of character intellectual property (IP) is expected to expand,” and “We will make an example of a successful K-character business in developing the WAACKY character and a more engaging and likeable story so she can be loved by anyone.”

In keeping with the brand slogan “WIN AT ANY COST”, WAAC is a brand that pursues fun and wholesome sports by reinterpreting conservative golf stereotypes with a creative idea to win by blurring the opponent’s focus. From May 1, 2022it will be officially launched by Super Train Co., Ltd., a subsidiary of Kolon Industries.

The third episode of Spin-off series from Big Hero 6 Baymax! got a lot of attention online. A specific scene featuring a trans man character sparked multiple discussions among viewers and fans. From the 2014 animated film Big Hero 6, Baymax! follows the adventures of our trusted inflatable health companion. The Big Hero 6 spin-off […]

Dragon Ball Super: Super heroes focuses on the return of the Red Ribbon Army, the criminal organization that has hunted down Goku and his friends since the original Dragon Ball series. As Dr. Gero is slain during the Android Saga, a new mad scientist takes over with deadly new Androids, as the new chapter of […]

If seeing is believing, consider 2-year-old Kenzo a true believer in the power of representation. This week at a family screening of Disney’s Encanto, Kah Brand noticed the moment his son realized that one of the characters, a young boy named Antonio, looked a lot like him. “He seemed impressed, he was just smiling and […]