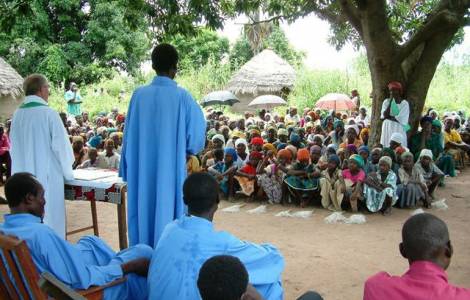 VATICAN – Pontifical Missionary Union: carrying out missionary animation with enthusiasm, creativity and in a spirit of communion


VATICAN – Pontifical Missionary Union: carrying out missionary animation with enthusiasm, creativity and in a spirit of communion

Vatican City (Agenzia Fides) – Father Dinh Anh Nhue Nguyen, OFMConv, was appointed Secretary General of the Pontifical Missionary Union (PUM) on May 1 and participated for the first time in the General Assembly of Pontifical Missionary Works (from June 1 to 3), feeling “great emotion”, as he himself said in his speech. Expressing his gratitude to God and to the Superiors who called him to accomplish this task, he underlined his recognition of the “important role of the Pontifical Missionary Union in the service of information, formation and missionary awareness in the ‘Universal Church and in the local Churches “. He also addressed special thanks to Fr. Fabrizio Meroni, his predecessor,” for the work he has accomplished over the past five years with such wisdom and dedication “.
In 2020, PUM completed 20 projects, despite the pandemic, and 35 more projects in 2021, many of which are still ongoing. “The projects launched are numerous and far-reaching”, underlined the Secretary-General.
But we do not brag about these achievements, for everything is grace of God, everything is the work of God. We do not boast, on the contrary, as the Apostle Saint Paul, missionary of the first hours of Christianity, said, of our weakness caused by human, existential and structural limits, because in our weakness and in our limits the power of God for the manifested the mission which is HIS work, not ours “.
Despite the difficulties, especially financial, since the UMP lives on the generous contributions of the Pontifical Work for the Propagation of the Faith and the offerings of certain National Directions, Father Dinh Anh Nhue Nguyen urged not to be discouraged, expressing the firm conviction that “mission and missionary animation are not only a question of distributing money, but also and above all the courageous proclamation of Christ to all and the sharing of the joy of the Gospel and of love of God”. For this reason, he reiterated his intention to “continue our common work of missionary animation of the universal and local Churches, always with enthusiasm, creativity, and in a spirit of communion and collaboration with all, in particular with the Secretaries General and the national directors “.
Then, the Secretary General of the PUM presented some projects for the next year to be carried out with the other Secretaries General and National Directors, in addition to completing those that are in progress, always having as objective the formation and missionary animation of all. the people of God.
First, the publication in English of the four fundamental reports presented to the International Conference, promoted by the Congregation for the Evangelization of Peoples in November 2019, on the theme “From Maximum illud to Evangelii gaudium. On the urgency of the missionary transformation of the church. “A second project refers to the analysis and meditation of the Word of God every Sunday from a missionary-catechetical perspective.” In our opinion, the renewal of zeal for the mission and for missionary animation starts and starts again from the prayerful reading and rereading of the message of Christ and of God in the Gospels and, in general, in the Bible ”, underlined the Secretary General.
In collaboration with the other pontifical missionary works, biblical-missionary refresher courses will be designed and implemented for priests, seminarians, catechists and lay animators. For catechists, in particular, with Agenzia Fides, we are thinking of a series of volumes on the life and witness of catechists in mission lands.
Besides the intention to renew and intensify the collaboration with the national and diocesan Directors of the PMS for missionary animation, in particular in the countries of ancient Christian tradition and in the territories where a structure of the PMS has not yet was established or is still in At the beginning, Father Dinh Anh Nhue Nguyen underlined, in particular, the will to launch “the organization of what we call the missionary Triduum, the three days of prayer, songs, preaching, meditation on the paschal mysteries of Christ from a missionary perspective “.
Finally, on a strictly academic level, the Secretary General of PUM indicated two other projects: the publication of the fundamental volume of Biblical Theology of Mission. Analysis of the key passages for a renewed biblio-missionary spirituality, and, ultimately, the creation of a “missionary Bible”, a kind of Bible commented on from a missionary-catechetical perspective, “which could be a Vademecum for each missionary and each animator. of the mission “. (SL) (Agenzia Fides, 06/05/2021)

Steampunk is a genre in itself

Market Overview and Analysis of Aesthetic Medical Devices Development by 2026