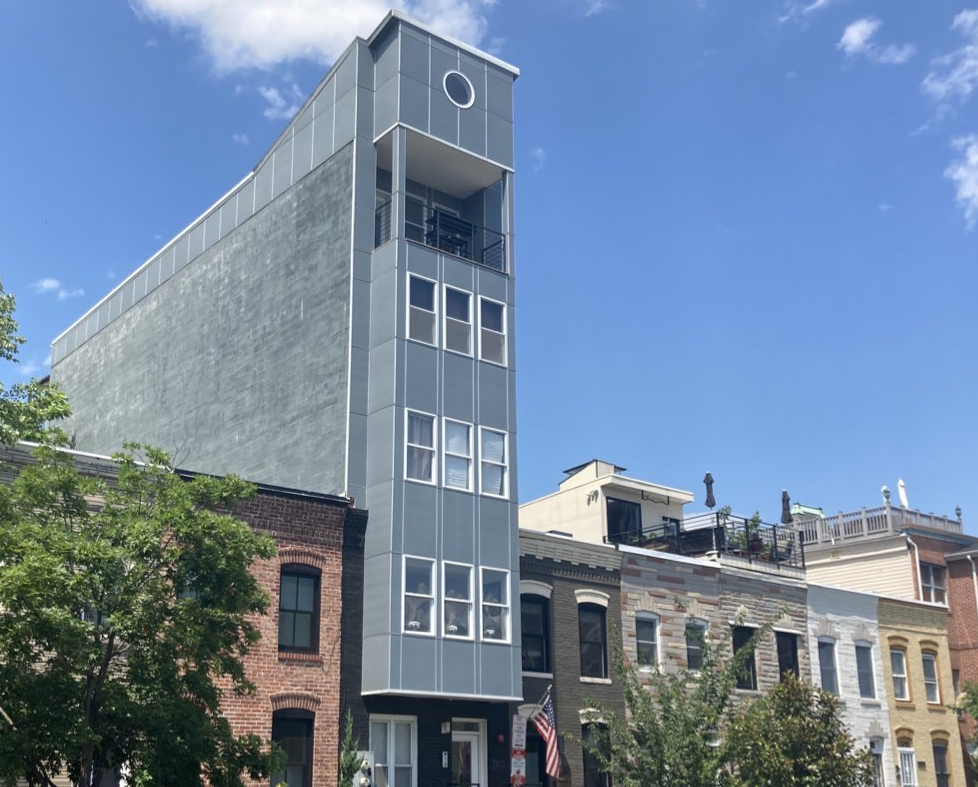 What the Middle Finger Building Says About the Washington Housing Debate


A stretch of V Street NW, just north of the U Street corridor, has a handful of two- and three-story townhouses, all lined up along the north side of the block. And in the middle, more than twice their height, is 1013 V Street NW.

The official name of the three-unit condominium is The Ava. But for years, online commentators called him the “middle finger.”

The building, whose “pop-up” addition became infamous after its construction in 2013, caught the eye of 2021 when a tweet journalist Jake Blumgart has gone viral.

The zoning hearing for this one must have been epic pic.twitter.com/CzdWWijlzA

The tweet renewed a debate that we see again and again in the DC housing and development space. Many argue that the region must do all in its power to add desperately needed housing units to curb an affordability crisis fueled by unmet demand. But some projects come up against a simple but powerful complaint: They are just plain ugly.

According to a 2013 OMCP report, the developer of Ava installed a steel framing on a century-old townhouse to build it up to five stories and 60 feet in height, bringing the total to three. ‘housing units in the building.

Unlike Blumgart’s Twitter who thinks the “zoning hearing for this one must have been epic,” the house was actually built of its own right – in other words, no zoning hearing is required because the plans were in accordance with the region’s zoning guidelines. The block, just a five-minute walk from the U Street subway station, is in an arts overlay district zoned for higher density development.

While the building may tower over its immediate neighbors, a few houses down is a six-story condominium built in the same year of comparable height. And one block away is bustling U Street, where authorities are taking action to increase density and allow more housing.

Yes, it is of right. It’s the small buildings that don’t fit – it’s a low-density single-use block in the middle of a mid-rise, mixed-use, transit-oriented neighborhood. pic.twitter.com/6pIinjMcX0

Ava was not alone – and neither was she alone in her notoriety. “Pop-ups,” vertical additions to townhouses that often create condo units, have been around for over a decade. The Post reported in 2014 that pop-up building was “spreading all over the city,” although it was not clear what that meant in raw numbers.

With the spotlight, of course, come the critics. Among the terms used to describe pop-ups, as reported in the Post: Monsters. Seeing. Weird.

Of course, aesthetic concerns about new construction are nothing new. From historic neighborhoods to redesign to ‘neighborhood character’, aesthetics are often a major part of opposition to new development.

For a recent local example of this dynamic, check out Petula Dvorak’s column in the Post about the seemingly endless battle in Takoma Park to block the development of a parking lot adjacent to the neighborhood co-op. In the column, Dvorak writes:

“These are the kinds of urban and community developments that have sprung up all over Washington and across the country. The compressed grocery store, the underground parking lot, the condos, an eyewear store, (another) bank and a version of the current fitness craze. Yuck.

It’s the kind of urban development that I applauded at first, but have come to feel. They are all over DC, they all look the same, and in any of them the residents didn’t have much to say. Who has time to fight them all?

Many people who look at town planning dismiss aesthetic concerns like these. Our region is facing a serious housing shortage, and the production of housing – including affordable housing, but also other types – is a major priority for the District. Even when new homes are expensive, as pop-up condos can be, research indicates that building any home can take the pressure off the housing market (although, of course, in light of DC’s travel history, this idea itself may be controversial).

The stakes in the aesthetic versus housing debate are high – but in the case of pop-ups in particular, not so much. This type of piecemeal density adds to DC’s housing stock, but not as much as building multi-family dwellings.

Between 2016 and 2020, census data on building permits show that permits for new construction of five or more units were significantly more numerous all apps from one to four combined units (of which pop-ups are only a fraction). These small projects accounted for only 5% of all new building permits over the past five years.

Numbers aside, the aesthetics of any given building are in the eye of the beholder. And if you’re a keen onlooker on the middle finger, you’re in luck: one of the units is on the market.